I'm looking for the following...

From 1 October 2019 some international visitors and transit passengers must hold an Electronic Travel Authority (NZeTA) and pay an International Visitor Conservation and Tourism Levy (IVL) before travelling to the country.

The following people do not need to apply:

It should be noted that it can take up to 72 hours to obtain an NZeTA. If a person does not hold an NZeTA when checking in for a flight or cruise, boarding will not be allowed.

From July 2019 an application can be made for an NZeTA and payment of the IVL made.  The IVL costs NZD35 for each person travelling to New Zealand, and for the NZeTA either NZD9 if a request is made by mobile app, or NZD12 for requests made using the online form.

Upon issue the NZeTA and IVL will be valid for multiple visits up to 2 years from the date of issue.

For further information or assistance with emigration please contact Lane Neave Lawyers on + 64 3 379 3720 or email liveinnewzealand@laneneave.co.nz.

How is world politics having an impact on NZ?

There is a slowdown underway in Australia’s economy. Businesses have been holding off from investing because of worries about a change in government. The housing market has been slowing down with some state capital property prices on average falling 10% – 15% as a credit crunch winds it’s way through the pricing system. In addition, house construction has started to fall away and worse has been anticipated in recent months in response to common expectations of a change in Federal government and imposition of changes costing property investors money.

But on May 18 the Australian Federal election produced a result completely at odds with virtually every poll of the past three years and returned a conservative Liberal-National coalition government with an increased majority.

This is slightly but not hugely relevant for the NZ economy. The positive bit is that the removal of huge uncertainties regarding taxation, climate change policies, strengthened unions and redirected spending will likely encourage businesses to start putting plans into action again. With some 16% of New Zealand’s exports going to Australia this will eventually be positive.

However there are a couple of caveats. Growth in the New Zealand economy is becoming less and less determined by changes in end-demand for our products and more and more by the availability of key resources such as labour. Had the Australian Labour Party won the election we would likely have seen some boost to labour availability for businesses in New Zealand from the return of Kiwis and decision by those here to remain.

The second caveat is that Australia has not had a recession for almost 28 years and no-one was expecting one pre-election. Perhaps this helps explain why the rate of exchange between the NZ and Australian currencies has been practically unaffected by the election result.

For New Zealand, it seems reasonable to continue to expect that average to slightly below average growth in our trading partners lies ahead, and that while this will likely keep tourism flat this coming year, commodity prices are likely to remain firm.

One unique threat however is the developing trade war between the United States and China. Australia’s close links with the United States and hesitancy about allowing Huawei to expand in the Australian telecommunications system is causing discontent on China’s side. This is manifesting itself as Australian coal failing to gain entry into at least one major port in China. Worse could easily come.

The threat to ourselves is if a trade pact is sealed between the United States and China with China agreeing to buy a lot more dairy product from America. This could displace New Zealand bulk dairy imports into China and dent the earnings of NZ farmers who will need to look for markets elsewhere.

It is hard to know quite how things will pan out. But in the absence of a true trade breakdown it still seems reasonable to speak in terms of growth near 2% per annum being likely in New Zealand’s economy over the next few years. This growth in the context of a 4.2% unemployment rate and widespread labour shortages will likely keep employers hungry for immigrant labour. Whether, however, a centre-left NZ government would be willing to allow more non-residents in to meet business staffing concerns is however something completely different.

The government remains deeply concerned about the many instances of abuse of migrants by earlier migrants more often than not, and the continuing low level of average wages growth in New Zealand – even though wages growth remains low virtually everywhere else around the world.

So loosening of rules affecting immigrants into New Zealand remains unlikely – especially as net migration flows have been trending up again since the middle of 2018, adding extra pressure to major city housing markets and transport infrastructure.

Every May people talk about the phrase “Sell in May”. What is this phrase referring to? It refers to an investment strategy of selling all equity investments in May, and switch to more stable cash and/or bonds for six months, then switching back into equities.

It originated in London – “Sell in May and go away, do not return until St. Leger’s Day”. In the old days, many share brokers would sell their equity positions in May and go on summer holiday until St Leger’s Day. The St. Leger’s Stakes is the oldest of the five classic annual English horse races and the last to be raced over the northern hemisphere summer in September. The Americans on Wall Street often refer to the following six-month period as the “Halloween Indictor” reflecting the increased consumer spending that occurs from October to May.

How would this “Sell in May” strategy have worked for NZ equities? JBWere has used 1990-2016 data to back test this strategy for NZ equities. Switching out of equities in May and back in October would have provided better returns. However, when we drill down into the contributing factors, the timing of switching out of equities would have helped to avoid a significant proportion of the large negative impacts from the “Tech Dotcom Crash” in March 2000 and the “Global Financial Crisis” in September 2008. As with the open NZ economy, the NZ equity market is not immune from being impacted from what goes on in the global arena. 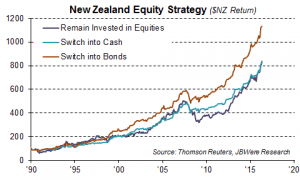 May to August has historically been a relatively quiet seasonal period for some important industries, such as agriculture production and tourism. Major political events, such as central government elections have tended to happen between September and November.

Investors should be cautious about trying to implement this apparent “winning” strategy. There are challenges involved with the investor having to be prepared to completely exit the equity market and face the low returns available in today’s low interest rate environment. Repeated switches might have tax implications depending on each investor’s circumstance. Some immigration investors are required to maintain some portion of their investment in equities, so they could not completely switch out of equities.

While ‘Sell in May” may be too extreme a strategy, it is nevertheless is good practice to review your investment strategy on a regular basis, especially when market reaches all time highs or historical lows. The NZX50 Index has recently surpassed the 10,000 milestone with a backdrop of a lower GDP growth projection domestically, as well as globally, and anticipated OCR cuts following the RBNZ late March statement. The RBNZ delivered a rate cut earlier this month. investors are encouraged to review the composition of their equity holdings and think about their tolerance for being able to weather an expected higher future volatility in equities.

Recent business confidence indicators point to businesses being cautious in their employment intentions. The Quarterly Survey of Business Opinion from the New Zealand Institute of Economic Research showed a net 5% of businesses increased their employment, despite a fall in hiring intentions. A net 6% still intend to hire more workers, in the March 2019 quarter.

Mark Williams
Rachael Mason
We use cookies on our website to give you the most relevant experience by remembering your preferences and repeat visits. By clicking “Accept All”, you consent to the use of ALL the cookies. However, you may visit "Cookie Settings" to provide a controlled consent.
Cookie SettingsAccept All
Manage consent

This website uses cookies to improve your experience while you navigate through the website. Out of these, the cookies that are categorized as necessary are stored on your browser as they are essential for the working of basic functionalities of the website. We also use third-party cookies that help us analyze and understand how you use this website. These cookies will be stored in your browser only with your consent. You also have the option to opt-out of these cookies. But opting out of some of these cookies may affect your browsing experience.
Necessary Always Enabled
Necessary cookies are absolutely essential for the website to function properly. These cookies ensure basic functionalities and security features of the website, anonymously.
Functional
Functional cookies help to perform certain functionalities like sharing the content of the website on social media platforms, collect feedbacks, and other third-party features.
Performance
Performance cookies are used to understand and analyze the key performance indexes of the website which helps in delivering a better user experience for the visitors.
Analytics
Analytical cookies are used to understand how visitors interact with the website. These cookies help provide information on metrics the number of visitors, bounce rate, traffic source, etc.
Advertisement
Advertisement cookies are used to provide visitors with relevant ads and marketing campaigns. These cookies track visitors across websites and collect information to provide customized ads.
Others
Other uncategorized cookies are those that are being analyzed and have not been classified into a category as yet.
SAVE & ACCEPT